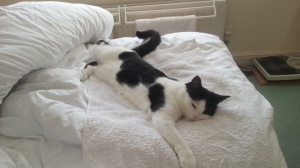 Two little turtles, made by my friend Charlie. 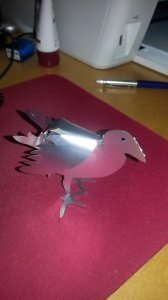 Side view of parlor cat

Bertie up a tree 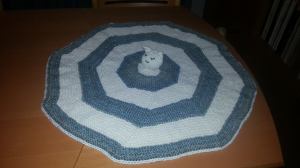 I really didn’t think it would be so long between posts, but I’ve been a bit busy lately. I had a nasty cold, with a bad attack of sinusitis, which laid me low for several days. When that got better we were in the midst of replacing the carpet which was ruined by the flood just after Christmas. That involved hiring twenty large boxes and emptying our 14 bookcases into them. YD and her hubby did that for us. Then I needed to back everything up, disassemble the computer network and disconnect it all, and put it back together again afterwards. Much more compact now, fewer wires and fewer power plugs used. Phew. YD and her hubby had to unpack all the boxes for us, which they did. What a pair of troopers. Played a blinder. We could not have managed it, certainly not in the time frame. (We treated them to a couple of meals, one curry, one steak-type, as a thank you).

Next, when the study was all back together again, we needed to empty the utility room ready for the vinyl to replace the horrid carpet in there. Not such a big job, we managed it ourselves, and it looks absolutely wonderful now. We’ve managed with less storage space too, which is even better. 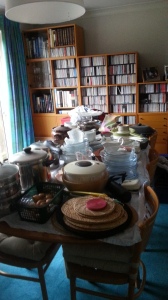 Trip to the tip soon, possibly tomorrow, and that should help. We’ve had major clear-outs. Also trip to the charity shop but we need to finish the book cull first.

The washing had been building up but at last can be done tomorrow. Sounds like a small thing but it looms large in my head. I actually managed to find space to do a bit of ironing today, and the sense of achievement was amazing!

The cat is a bit discombobulated but is recovering now. At one point she ran into the empty utility, stopped for a nano-second, and in that nano-second realised her food was still in the right place. “Panic over, food’s still there, stand down, troops”. Bless. Everything of hers is back in the same place now. She’s quite a quiet cat, not particularly affectionate, but in need of reassurance when things change.

I’ve been completely off the social radar for the last two weeks. This work totally took over my brain and I couldn’t think about anything else. No multi-tasking possible. But I’m hoping that’ll settle now. But am so tired I could cry.

Meanwhile the BluRay player isn’t working. Damn and blast. We were just looking forward to watching Breaking Bad again. Grr. Still, it’s under guarantee so should not be too much of a problem.

ED and baby are doing really well. Baby is growing apace and is just delightful. It’s a joy to see the family together, because ED’s partner is a wonderful father, as well as ED being a wonderful mother.